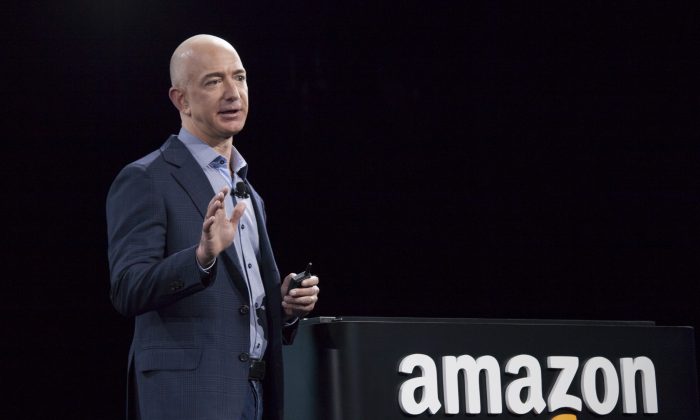 President Donald Trump is going after Amazon and its business model. Here is a battle brewing based on the significance of one main feature, the Transaction. It asks just one question: How come Jeff Bezos gets to keep all of those billions, dodging various taxes with online business, while the common man in the United States is struggling from one day to the next? This is the crux of the matter.

To understand how we got into this situation, it is very important that we look at the history of the transactional development. In one line, Amazon has wiped out entire chains of the economy with its powerful understanding of one main action: undercutting. This is Bezos’s main aim as he marches ahead with a huge growth of shareholder returns.

This is classic industrial warfare. Bezos’s drive to take over global markets is a case in point of how important industrial warfare thinking is in this modern day and age. He has some very smart people who have been infected by this style of thinking in his boardrooms.

This is not a company anymore. It is a war machine designed for just one thing: devouring. They don’t compete anymore; they eat competitors. That’s the main aim of the growth process.

Every day, we shop at brick and mortar stores and say to ourselves, “Can we get it cheaper from Amazon?”

As we make decisions in our mind and click around the internet for our desired consumption of goods, Amazon is busy thinking of how to dominate and maintain relevance. It has probably produced learning engines that scan and analyze buying patterns and changes in the competition culture as the market moves forward, swaying violently from left to right.

Only the most responsive steering and the most aware driver who has the best tire grip can stay on the road in this one. Amazon is a flat aerodynamic machine: the downforce gripping the marketplace is strong, the spoilers are doing what they are supposed to do, and the transactional engine performs very highly with few fuel stops, all as the share price keeps growing ever larger, giving them even more power and ability to pass the competition. In fighter jet terms, it is a MiG-87, something from the future to be marvelled at.

You just can’t get away from the fact that this transaction design is so carnivorous and vicious toward anything that stands in its way that it will end up devouring anything that comes against it.

Yet the seeds of death have already been planted.

Like any other entity, Amazon has the seeds of destruction already built into its DNA, just like General Motors did in the late ’90s, and similarly to the banking sector just before the catastrophic collapse in 2008. We all know the statements “This is too good to be true” and “Something is not quite right here”. Like the disease of cancer, the problem is already within us, and it is just a matter of time before it comes out.

The question is, what are seeds of destruction and what do they actually look like? The answer lies in the current model of operation and the change in the environment of trading. When things are on the up, everything looks good, and when they suddenly change, what looked good just two years ago can suddenly turn to “I better get out now while there is still time.”

For Amazon, the seeds of destruction are the shareholders and the relationship they have with the share price. This is the exact point from which the cancer will grow and metastasize. Bezos likely knows it and worries about it every day. It’s staring him right in the face and sitting opposite his desk as he studies the daily financial reports and thinks to himself, “How do I keep this going?”

It’s not just Bezos who worries about this; it’s every CEO who is facing this disease. They can’t keep running from it for long because the more the competition increases, the more threats pile up in every corner both internal and external, and the worse the situation gets. Anything can take this transaction down competition, price changes, currency changes, logistics cut outs, international politics, trade agreements, recessions, depressions, and fluctuation in management thinking.

In the digital landscape, smaller, more vicious competitors can act like velociraptors. These small-business competitors may even hunt in packs, and be better able to adapt to the environment precisely because of the fact that they are smaller, faster, have bigger claws, and are looking for just one thing: to eat the big guy. They are just waiting for that illness to set in so the big entity can stumble just a little. They are always in the grass, plotting, planning, circling their prey—and Bezos’s management structure likely knows that they are there. Amazon can try to step on them or eat them using its big management style, but at each turn, another one pops up.

Then there is Trump, who is inducing hatred for this company. He openly dislikes Amazon, and Amazon dislikes him. All Trump has to do is point out the big monster that is Amazon, increase pressure upon it, and immediately its share price will go lower. Trump knows this: He just wrote a couple of tweets and the share price for Amazon went tumbling. New competitors were born, new pressures were created, new fissures appeared, and as predicted, the share price was affected.
The question is not whether Amazon will die, but how and when. It looks like the answer is only a couple of years away. In industrial war, the transactional model Amazon is using has its limitations. From a banking point of view, it looks like 2006.

Understanding ‘RYAN,’ One of the Key Concepts of Military Development