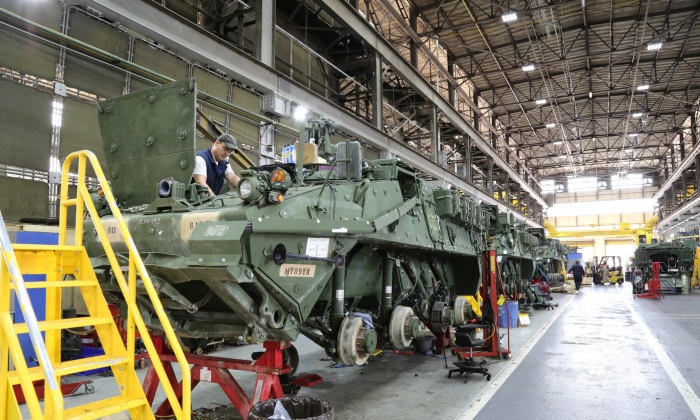 Anniston Army Depot employees test components of Stryker vehicles recently overhauled at the installation. The depot is one of 23 geographically-dispersed facilities that comprise the Army Organic Industrial Base, which manufacture and reset the Army's and joint service equipment. (Photo Credit: U.S. Army photo)

When it comes to military development, four of the key elements are range, yield, accuracy, and numbers (RYAN). I like to personify these elements as “‘RYAN,’ the world’s most important Irishman.” So why is RYAN so important? Because, he is everywhere, on every military research facility, and present in the fears and hopes of every country.

With range, you measure every kinetic weapon from its range. How far can it go? What speeds does it travel at? Can it reach the target? Can it overcome defences? Can it penetrate well protected and disguised areas? You measure a missile by its range and its reach.

As for yield, we look at how big is the bang at the end? How many different munitions can be delivered? What is the total devastating effect from the delivery of these systems? How deep can the yield effect society and the parameters that run that country? What is the return on investment from the yield of the warhead? Can it make the other guy turn and run?

With accuracy, we ask whether it can reach the target. Can the munitions evade countermeasures? Can it pinpoint the exact location of the target and explode the way we want it to explode?

Then with numbers, we ask “how many do you have?” The more you have, the more attempts you get to hit the target.

This is the basis of aerospace-based warfare. Anything that flies or travels through the air, whether it be a tank shell or a shoulder-fired MANPAD, has to have RYAN built into it. Or it is useless.

What has not been considered is the fact that RYAN has made the entire system of war we once knew obsolete. And no one really knows it yet, but we are starting to realize that this obsolescence is taking place. The fundamental point I am trying to make here is that many nations have efficient weapons systems and ease of developing them has been compressed into overnight timelines.

The modern-day information systems, combined with product development systems, has made RYAN so powerful that it is simply too risky having a war in the first place.

So how did this situation develop?

Industrial engineering systems of the modern day and age rely less upon human input and more upon artificial intelligence. With laser scanning systems involved within the 3D printing environments, product development timelines have been compressed rapidly into huge algorithms which have learning and defects removal programs installed into their design make up. These technologies of design engineering, learning, adapting, and copying are now being emailed, linked, downloaded, cloud-centred, and USB shared from every direction possible. Dual use technologies which are more prevalent now than ever before in the past have blurred the boundaries between defence and civil to such a point that there is no more boundary left to administer.

This indicates the problem is only to going to get worse, that’s if you can call it a problem in the first place. It only becomes a problem if it is being supported by a rules-based system which doesn’t allow these types of practices to happen. However, if every single country in the world is now doing these dual use, self-development and industrial warfare practices… then it means that the rules are obsolete. And if the rules are rendered obsolete, we then live in a different world which we have to adapt to.

The control element the rules were designed for have gone. If we try to force the rules upon countries like China, North Korea, India, Sri Lanka, and many others they will either ignore the rules or just shun the enforcer themselves and say “So what? Everybody else is doing it!”

The reason why I have concentrated on RYAN so much is to point out the fact that this cannot be stopped now. The atomization process of sharing through the internet has become so widespread over so many different platforms that you don’t have to go through a direct target entity to get it, you can just as easily go through a third, fourth, and even fifth party who has got the same information. Countries have now made technology transfer their highest priority, they won’t even complete a business deal without the appropriate technology transfer protocols in place. This applies to civilian and military build contracts. Every country is stipulating these demands in any business deal.

Bringing this to a conclusion, all countries are now considering their positions. The fundamental question to tackling a world which has changed so rapidly within 10 years is very simple. Should our country be smaller and independent, or bigger and part of a union or block? Understanding the process of economic and industrial atomization is the key to answering that question. My understanding points towards the logic of Brexit, which indicates that in an uncertain global environment such as this where we are experiencing such dramatic global upheaval and unrest. It is better to be smaller, this gives you agility, control, adaptability, experience, approach, interest, capability, investment capability and much more government based interventions into the home country rather than being guided by the horse trading of living up to other nations and economic blocks expectations. Brexit is a Godsend and an opportunity we British will cherish in the decades to come. So long as we can control what’s in our borders and provide security in all of its forms for our people, the rest will sort itself out.

It comes back down to RYAN for Britain and Brexit as well. Range shows that we can control our country. Yield shows that we have our finances in order and can provide directions to keep our institutions running. Accuracy means we have all of the intelligence feed systems required to keep a close eye on our different shires within the UK. Finally, Number indicates that we have 60 million people on a small island economy which provides a tax base which can feed the security of the UK for decades to come. Is Britain ready for the outcomes of Brexit? I believe we are – RYAN, the eternally valuable Irishman just showed us the way.

Why Amazon will eventually die