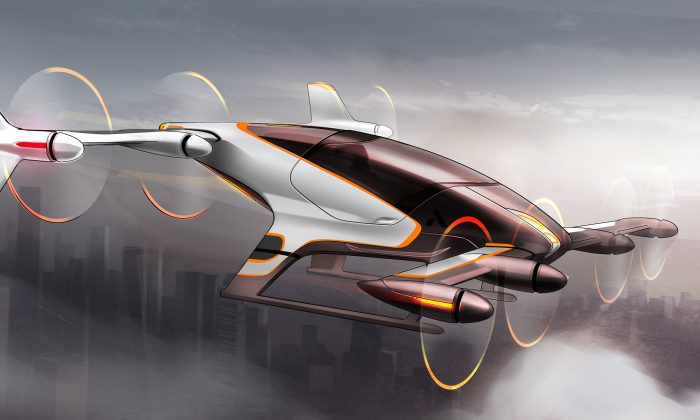 This artist rendering provided by Airbus shows a vehicle from their flying car project, Vahana. (Airbus)

Innovation doesn’t just come in small incremental movements; it comes in paradigm shifts, as well. When innovative capability can cross platforms and combine different technologies to embrace those environments, we really have a globally relevant economic cycle.

Innovation appears to be pointing toward road-air-sea crossover vehicles, with power sources that range among electric, gasoline, fusion, hydrogen cells, and many power combinations. It’s worth looking at the ways in which these innovations will change our lives in the years to come.

Many designs for air-road crossovers are being conceived. The research and development for this type of vehicle is now so easy to apply that the number of products coming out is becoming vast and their applications unlimited.

Take Yves Rossy, and the jetpack he designed in his garage. This ex-pilot had an idea about a jet wing. He made one, strapped on four gas-turbine engines from model airplanes, embedded a fuel system into the wing and, voila!

The new developments in cars will change the landscape, as well. The new flying cars and bikes, which are based entirely upon the drone idea, are now becoming reality. As these new flying cars become commercially available, people will come to use them in all sorts of ways, thus affecting everything around them from safety, navigation control, commercial uses, military uses, and even criminal uses.

If there are 1,000 of these cars flying about in the years ahead to come, the police will need one as well to catch any criminals who do ‘bad stuff’ inside them. This means that helicopters and various other flight-based vehicles will likely hit the road to obsolescence, too. Regulation will have to change as well, to allow for control and licensing of these types of products as they transform the very nature of our lives.

The R&D signs are everywhere. Economic atomization and R&D home-based capability are leading people to go out on their own and discover what they are capable of, leading to innovations and intelligence levels being applied throughout the world, as people say to themselves, “I’ve got an idea, and I think I can make it.”

The most important factor is the industrial effect of these types of innovations. What is the cause and effect on established industries as they become increasingly left behind, with obsolescence sneaking up like a Cheetah seeks its prey?

Well, the fact of the matter comes down to industrial warfare, it’s all about transactions. If this guy makes a flying car in a small shed in his back garden, industrial unit or R&D laboratory somewhere, he removes 1,000 transactions across a range of established brands, leading to 1,000 fewer orders on their order books for small planes built upon research from the 1920s.

This will lead to cutbacks, layoffs, and closures among weaker competitors who have plodded along for decades. When others realize that the one who got there first with his passenger drone car is making money, they will pile into the emerging market, as well.

Published on the Epoch Times